Billy has written more zines than he can count.

He’s written 27.5 issues of Proof I Exist, 12 issues of Last Night At the Casino, ?? issues of The Difference Between which he’s since collected into a small book. Following the aforementioned and so much more i don’t know about, he recently started A Good Place to Start (a most fitting title!) and a monthly zine to last through 2018, East Coast Adventures. 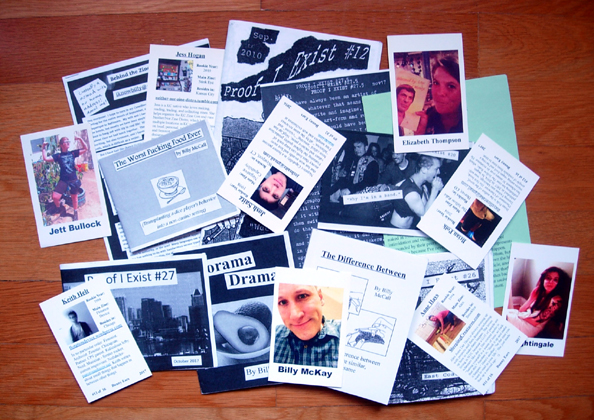 Though a few of the titles should offer at least some clues as to the subject matter, most of Billy’s zines are usually of a more personal nature and in short story form, recounting his adventurous everyday life, both at work and at play.

His single-issue zines include:
Diorama Drama
Naked At School
The Dinner
The Twist
The Second Time I Died
The Worst Fucking Food Ever

Billy also contributes to Cuneiform APA with Behind the Zines, which deals with anything having to do with zines – mentions other peoples’ zines Billy comes accross, his thoughts about the world of zines, interviews with people invloved with zines in various ways, etc.

To top it all off, Billy also makes zinester trading cards!
…And audio-zines (audio versions of zines he reads) – audio available here.
…And was the mastermind behind the amazing Ditto Machine music project, super hits of yesteryear with altered, zine-themed lyrics.

Billy has also played drums and screamed with many bands which you can hear here.


ps. This presentation is SO incomplete, so get in touch with Billy and find out more from the man himself!