I boarded this train well into its journey. Just got my first few issues of Hiroshima Yeah! -that’s issues #149-153, July to November, 2017. And though I didn’t send off for a subscription, as there isn’t one, as far as I’m aware of at least, I’m certainly staying aboard and looking forward to the rest of the ride.

Our motorman, Mark Ritchie, is most definitely not one of those here-today-gone-tomorrow types, off to follow another fancy as soon as the hype fades. He published his first zine, Splish! Splash! Splosh!, in 1987, when he was still slightly too young to go to gigs. It was around the same time that he also started playing music with friends, the endeavor which morphed into the band that eventually became Librarian. Shortly afterward he set up KAW Tapes so as to release his own music as well as that of his friends. Mark has since played in Richie Cunningham, Elephantcopter and Shy Rights Movement, as well as solo, sometimes as Frank Peck and at other times by his given name. Following Splish! Splash! Splosh!, he published more zines: What Colour Are Your Pyjamas?, Sexual Fantasies of the Rich and Famous, Puppy Power, The Furry Terminal and Sniper Glue (12 issues, ? – January 2005), “the frequent name changes largely due to restlessness, boredom and a desire to keep things feeling fresh.”

In March 2005, Mark started Hiroshima Yeah!, which he once described as, “Not a hobby, but a LIFELINE, a MISSION. With NAUGHTY words!” A monthly, personal/music zine, which features prose and poetry, random reviews of music, films, books and gigs as well as infrequent interviews. In addition to Mark’s rants, you get even more of the same from regular contributors Joe Garcia, Mitch Hell and Mark’s main partner in crime, Gary Simmons.

Mark also has a recently published (2016) split poetry zine with Pete Coward (it’s the centerpiece, properly printed on nice cardstock with a bright pink cover); “Poems from Glasgow” vs. “Poems from London”. It was a rainy day. 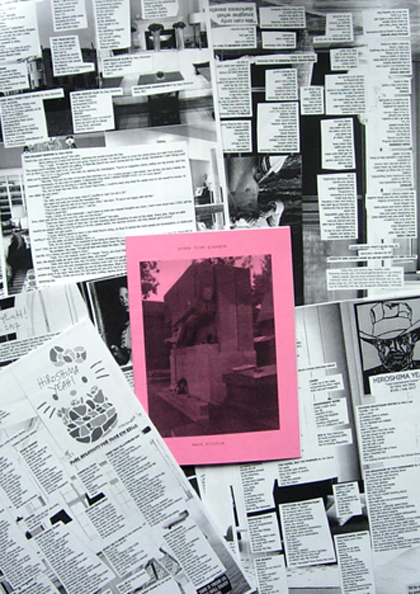 Want hard copy? Get your poison – get in touch with: [email protected]
Enjoy reading old issues on your phone / tablet / i-thingie? GoTo: HERE